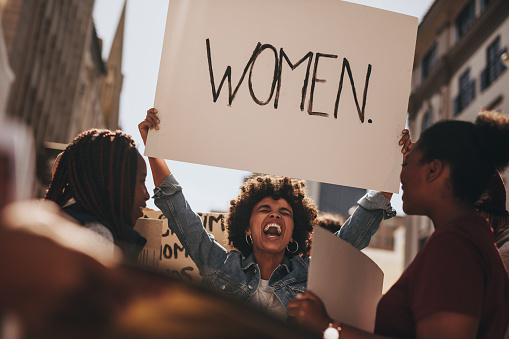 Today, serious gaps persist in women’s rights across the globe. In many countries, women are denied the right to vote because of blatant discrimination in law and political processes. In other regions, women are denied equal body autonomy and face violence directed at them. In other areas, high maternal mortality continues and unpaid care workload limits the enjoyment of basic rights for women and girls. Despite decades of progress, women are still suffering from a lack of basic rights and are still underrepresented in political, economic, and social activities.

In the workplace, the gender pay gap is a striking example of gender discrimination. Human rights state that men and women should be paid equally for the same work. Unfortunately, women earn 77% less than men for the same job. This disparity prevents women from achieving financial independence and increases their risk of poverty later in life. This inequality in pay and work is addressed through the International Convention on the Elimination of Discrimination Against Women (CEDAW).

A woman’s reproductive rights should not be undermined in any way. National laws should not prevent women from exercising other human rights, including voting and owning property. In addition, women’s rights to family and political participation must not be violated if their spouse has a legal right to it. Fortunately, many countries have recognized this issue in some way, and many countries have implemented laws to protect women’s rights. A few of the more important laws addressing the issue include the following:

In the United States, women can apply for citizenship and vote. This was initially an unimaginable concept, but it has become a reality. However, the women’s rights movement and the NOW campaign have contributed to dramatic social and legal changes. Those who have witnessed the changes of the past understand and accept these advances without question. Younger generations are unable to imagine life without these changes. So, let’s look at some of these milestones in the history of women’s rights.

The United Nations has taken the lead in addressing this issue. The Sustainable Development Goals (SDGs) for women hold real promise in achieving gender equality. They include specific goals for ending gender-based violence, ensuring access to reproductive health and equal education, and reducing the burden of unpaid care work. These goals require the involvement of women and funding grass-roots women’s groups. In the meantime, we need to work to protect the rights of women and girls across the world.

Sexual and reproductive health services are fundamental human rights that must be accessible to every woman. Those rights should include access to family planning, abortion, and STI/HIV testing. States must adopt gender-based approaches to healthcare to prevent the barriers to access these services. Further, the rights of women must be protected from discrimination. There should be no discrimination against women in the workplace or in their private lives. This is crucial to ensuring that women have the opportunity to make informed decisions about their own bodies and sex life.