How Values Affect the Way People React to Victim Blaming

How Values Affect the Way People React to Victim Blaming 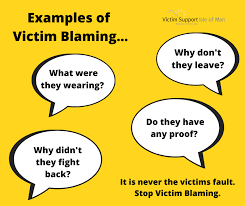 Often associated with sexual violence, victim blaming occurs when a victim blames themselves for an assault, rape, or other crime. This may include suggestions that the victim was too drunk, wearing provocative clothing, or that they were too careless to fight back.

Research conducted by Laura Niemi and Liane Young has found that people’s values affect the way they behave in a situation where someone is being victimized. They found that the way we react to victimization is based on two basic sets of moral values, binding values and individualizing values.

Using a study that compared victim blaming in different cultures, Liane Young and Laura Niemi found that a culture’s moral values had a large impact on how people behaved after a crime. For example, Japanese people are more likely to blame themselves for a crime than a White American. However, people who are higher educated and have a more liberal outlook are less likely to blame themselves for a crime.

In a study involving 994 participants, Niemi and Young found that the moral values people hold influence the way they behave in a situation where a crime has occurred. For example, people who have stronger binding values are more likely to blame themselves for a rape than people who have stronger individualizing values. These findings suggest that it is not only moral values that influence the way we behave, but also the way we perceive other people.

The research also found that age affects the way people react to victim blaming. For example, children tend to blame themselves for abuse more than adults. When children are told about a sexual assault in a movie, they may blame the character for being naive or dumb. This can be influenced by the way the character is portrayed, as well as the type of sexual assault that occurs.

Young people often blame themselves for a crime online, even if the crime was committed by someone else. For example, when a person is bullied online, they may blame themselves for not fighting back or not being strong enough. These responses are driven by the belief that people deserve what they get. However, it is important to recognize that people may not realize that they are holding a bias towards the victim.

When it comes to domestic abuse, people are often blamed for not leaving the abuser, but they should not be blamed for not fighting back. Instead, people should be encouraged to get the help they need. If someone is suicidal, they should go to a mental health professional for help.

Victim blaming can also be a barrier to survivors receiving support and obtaining justice. As a result, they may hesitate to report a crime for fear of being judged. Survivors should seek therapy and medication to help them process the emotional impact of the trauma.